I grew up in Sussex. I was born in Brighton & spend my school years in a village near Horsham before moving away and drifting into the big wide world, settling – for the moment at least – in lovely Whitstable, Kent. According to Eighteenth and Nineteenth century lore, Sussex-women were the best pudding-makers in the country; what better excuse I thought to put my pudding skills to the test, that the famous Sussex Pond Pudding.

Ready to pour the cream on…

The History, or ‘Who stuck a lemon in it?’

In 2011, Heston Blumenthal launched the Hidden Orange Christmas Pudding. In the two Christmases since, every table on December 25th, had to have a Christmas pudding with some novelty centre ingredient. Gone are the days when a silver sixpence cuts the mustard (!) and only the most backwards backwater would nowadays dare to serve a (gasp) ordinary Christmas pudding.

Heston based his recipe on the Sussex Pond Pudding, which has seen many incarnations since the first mention in Hannah Wooley’s cookbook The Queen-like Closet (1670); no doubt, it had existed in towns and villages around Horsham, Uckfield, Westham, Crawley, Haywards Heath and East Grinstead for many a year before then. Over time, the Sussex Pond Pudding became distinct from its near neighbour the Kentish Well Pudding, for two main reasons: 1) a Sussex Pudding puts a whole fruit (now commonly Lemon, but previous references to Apples, Quince and Plum are well documented) 2) A Kentish Well Pudding has only sugar and butter for the filling, but puts currants in the suet-dough (and no herbs other than a smattering of cinnamon and nutmeg perhaps).

The popularisation of the lemon in the centre of the Sussex Pond Pudding seems to have been the recipe in Jane Grigson in her seminal book English Food published in 1974.

The recipe today nods to Wooley of course, but also to Grigson and William Ellis who wrote The Country Housewife’s Family Companion (1750). It also contains a fair amount of my own licence; but I can do that – I hail from Sussex.

‘…make a round pudding of the same ingredients [flour, butter, milk and eggs], which is to be tied up in a cloth, and the middle of this pudding they put a piece of butter, and so inclose it in the dough that the butter cannot boil out . When boiled enough, they find the butter run to oil, and well soaked into the pudding.’

zest of one lime

120g shredded suet (vegetarian suet is fine, but not as rich)

A pinch of salt

a small handful of semolina or dried breadcrumbs or polenta

Mix the flour, breadcrumbs (just pull the inside out of half an unsliced loaf and turn into breadcrumbs using a hand-blender), suet, salt, coriander, thyme and lime zest together with your hands. Add the milk slowly, forming the mixture into a ball as the milk is added. If the mixture becomes too tacky, just add a little more flour to the outside of the ball.
Greast the one litre pudding bowl with butter and rub some polenta or dried breakcrumbs around the bowl to making extracting the pudding later much easier. Roll the suet-dough-mixture out until it is large enough to line the bowl. Cut a large circle and cut this in half, so that the pudding basin can be lined easily, fitting the halves together inside the bowl (leave some – 1cm – overhang at the top).

Roll the lemon hard on a worksurface to release the juices and prick it deeply about 5 times with a fork. Place half the diced butter and half the mixed sugars into the pastry-lined bowl, then place the lemon on top of these & around and above the lemon put in the rest of the butter and sugars.

Roll out the remaining suet-pastry to form a small circle lid, putting this on top of the lemon/sugar/butter and then pressing the overhung edges of the side pastry on top to completely seal the pudding (you may need some milk on a brush to cement this ‘seal’). 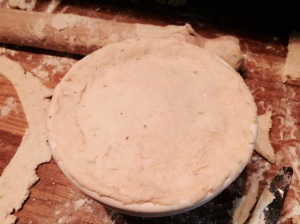 Cut a large circle of baking parchment (about 15cm wider in diametre than the pudding bowl at its widest). Put a pleat/fold in the middle of this and then place it over the bowl and tie underneath the bowl’s rim with string. You may also want to fashion a handle out of string to make removing the hot bowl easier later.
If you now want to leave the pudding to rest in the fridge, it will keep well for a good day or so. If you can’t wait, get boiling: stand the wrapped pudding in a bowl of boiling water (the water should come just above halfway up the bowl) and boil (with a lid on the saucepan) for 2 1/2 hours. You will need to keep topping up the water every 20 minutes or so, so that it doesn’t boil dry.
When boiling, turn the pudding out into a bowl (you may need to run a knife around the edges to loosen it first). Only cut the pudding when you have an audience to see the juices run out. Serve with cream.
This serves about 4.

This has a delightfully marmalade-made-the-way-gran-does hit. Yes, it is rich and yes, you will only eat a small amount, but those five bites may well change your life. Well, okay, they won’t change your life, but you’ll respect a Sussex woman a lot more when she says that she makes a mean pudding.

Echoes from the Vault